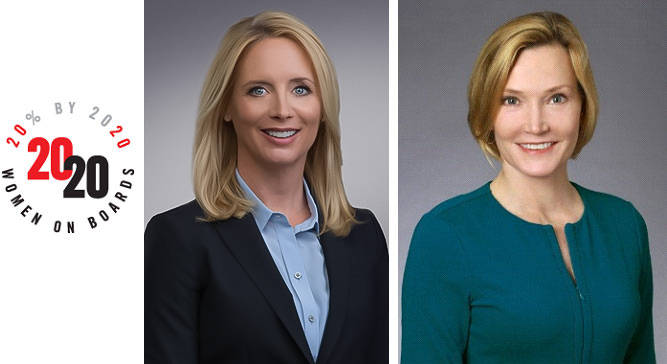 For the second consecutive year, 2020 Women on Boards, a national campaign dedicated to increasing the percentage of women on corporate boards to 20% by 2020, is pleased to recognize STORE Capital Corporation as a 2019 Winning ‘W’ Company for meeting the standard of having at least 20% women on its corporate board. STORE Capital’s Board of Directors includes Mary Fedewa, STORE’s Chief Operating Officer and Director, and Catherine Rice, Director.

Ms. Fedewa is a co-founder of STORE Capital and was appointed as a Director in August 2016. Ms. Rice joined the Board in October 2017, and previously held executive positions with several major real estate investment companies. The 2020 Women on Boards honor is expected to continue next year with the addition of another woman to the Board. Tawn Kelley, a leader in the mortgage industry and several industry organizations, was announced as a new member of STORE Capital’s Board of Directors in February 2020.

STORE Capital continues to be a part of the 52% of Russell 3000 companies that are currently ‘W’ Companies, which are up from 43% in 2018. The company received recognition in 2018 by 2020 Women on Boards for meeting the same standard with Mrs. Fedewa and Ms. Rice.

Winning ‘W’ Companies are cited in the 2020 Women on Boards annual Gender Diversity Index which tracks corporate board seats held by women among the Russell 3000 Index, a capitalization-weighted stock market index that measures the performance of 3,000 of the largest publicly-held companies that represent approximately 98% of the US public equity market.

In 2018, only 17.7% of board seats were held by women, up from 16.0% in 2017. Still, nearly one-fourth of public companies in the U.S. have NO women directors on their boards. The campaign recognizes STORE Capital as a positive example and highlights the advocacy of achieving more than 20% of female board seats by 2020. Annual results of the 2020WOB are announced every November for their annual signature event and fundraiser, the National Conversation on Board Diversity.

Any cookies that may not be particularly necessary for the website to function and is used specifically to collect user personal data via analytics, ads, other embedded contents are termed as non-necessary cookies. It is mandatory to procure user consent prior to running these cookies on your website.